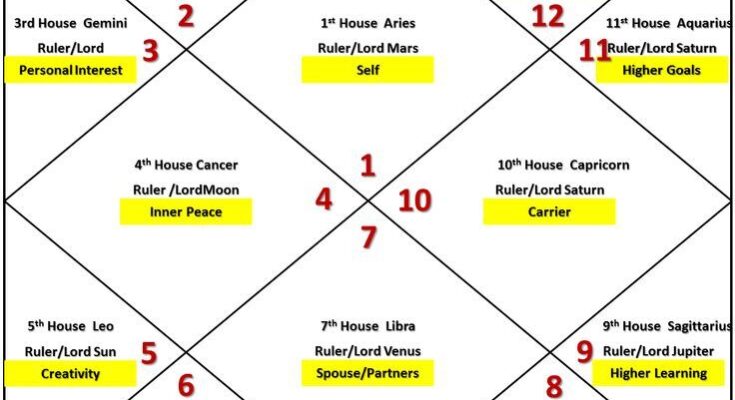 Hindu Astrology due to its roots in the Vedas is also called Vedic Astrology, or sometimes Indian Astrology. Hindu Astrology studies celestial bodies like Sun, Moon and Planets and their impact on human life. In Hindu Astrology, predictions and interpretations are done according to the birth chart, popularly called Kundali. Birth-chart, or Kundali, is a figurative interpretation of human life according to the positions of celestial bodies during the time of an individual’s birth. The birth chart is divided into 12 sections and these sections are called 12 houses in the birth chart. Each of these houses represents a different aspect of an individual.

The second house represents money, wealth, and possessions. The second house controls the tongue, teeth, eyes, mouth, nose, facial bones, upper neck, and bones. Zodiac sign of the Second House is Taurus and Venus is the lord of the second house.

The Third house represents the mental capacity of an individual. This house also tells about brothers, sisters, neighbors, interests, habits, mental intelligence, and communication of an individual. Legs, hands, arms, shoulders, collar bones, lungs, and nervous system are ruled by the Third House. Zodiac sign of the Third House is Gemini and the planetary lord of the third house is Mercury.

The fourth house is associated with the domestic happiness of a person. This house also represents an individual’s mother as well as a vehicle and real estate of an individual. The Fourth house tells about the stomach, breasts and digestive organs. Zodiac sign of the Fourth House is Cancer. Moon is the lord of the fourth house.

The fifth house tells about creativity, playfulness, joy, pleasure, and romance in an individual’s life. This house represents mental intelligence, and the capability to create and innovate. The fifth house has control over your spine, upper back, middle back, heart, stomach, and pancreas. The fifth house is the house of education, knowledge, learning, wisdom, good luck, and money. Zodiac sign of the Fifth House is Leo. Sun is the lord of the fifth house.

The Sixth House corresponds to the health, wellness, and the daily routine of an individual. This house also represents debts, obstacles, enemies, and difficulties. The Sixth House rules waist, lower abdomen, kidney, navel, small intestine, the upper part of the large intestine, and appendix. Zodiac sign of this House is Libra. Just like the third house, sixth house is also rules by Mercury.

The Seventh House tells about the spouse /partner (including business partner) of an individual. This House governs Kidneys, ovaries, and the lower half of the back. Zodiac sign of this House is Libra and it reveals the darker side of the relationships, the partnerships the individual forms. Venus rules over wealth in the second house, and Venus also rules relationship and marriage in the seventh house.

The Eighth House rules over death, longevity, and sudden events in a person’s life. This house also reveals mysteries and transformations and sudden gains and losses. This house rules sexual organs. The lord of the eighth house is Mars.

The ninth house is the house for truth, principles, dreams, and intuitions. This house tells about religious inclination, ethics, and morality in a person’s life. Zodiac sign for this house is Sagittarius. Jupiter rules the ninth house.

The tenth House tells about actions performed by an individual. For example, the nature of work or occupation, position or prestige in an individual’s like will be revealed by this house. This house is ruled by Saturn and corresponds with the Capricorn energy.

This House is the house of gains in an individual’s life. This house plays a pivotal role in determining what brings profits as it tells about wealth, income, gain, name, fame, and money. This house also reveals friends, acquaintances, well-wishers and the individual’s relation with his/her elder brother. The Eleventh House symbolizes Aquarius and Saturn rules this House.

The last house in the Birth Chart is Twelfth House that signifies the ending of an individual’s life cycle and the beginning of his/her spiritual journeys. The last house corresponds to the intangible things like intuitions, dreams, secrets, and emotions. This house is represented by Pisces and ruled by Jupiter.

According to Hindu Astrology, there are 9 planets, where two planets are shadow planets, Rahu and Ketu respectively. These planets do not rule any house, however, tremendously influence other planets.