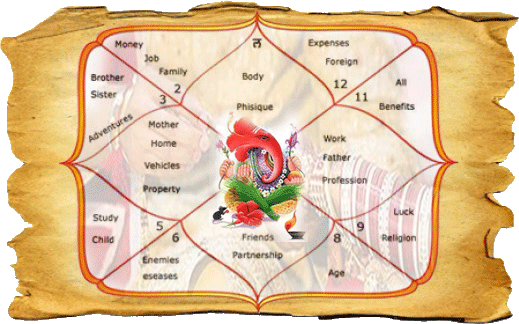 Hindu Astrology is a branch of astrology popular in countries with a predominantly Hindu population, for example, India and Nepal. Due to its roots in the Hindu scriptures Vedas, Hindu Astrology is also popularly called Vedic Astrology. In Sanskrit. it is called Vedanga Jyotish. Astrology or Jyotish is often called the fifth Veda, referring to the fact that how important is Jyotish in the Vedas. Hindu Astrology is believed to be at least 5000 years old.

There are various aspects of Vedic Astrology, and the most important one is the birth chart. The Vedic Birth Chart, or natal chart, is a square or rectangular drawing that is divided into 12 sections called houses. The 12 houses in the birth chart represent 12 zodiac signs, for example, the first house is the first Zodiac sign i.e. Aries and the 12th house is Pisces. Each of these houses also has its own ruling planet, for example, the first house is ruled by Sun. In Hindu astrology, there are 9 planets that also include Sun and the Moon.

The Hindu birth chart primarily consists of 9 planets placed in 12 different houses. Which planet lies in which house depends on the planetary position at the time of the birth of an individual. The 12 houses in the birth chart rule different organs of human bodies. For example, the first house rules the face, head, and personality of a person. The 12 houses also represent different aspects of human life including finance, age, disease, relationship. For instance, the fourth house is for mothers and the seventh house is for spouses. Likewise, the second house is for wealth, the eleventh is for gains, and the twelfth is for death.

The Vedic birth chart is mostly related to the reoccurring planetary cycles. These planetary cycles are called dashas. There are three types of dashas, viz. dasha, maha-dasha and anter-dasha. In order to interpret the Hindu birthchart, astrologer needs to have a clear understanding of these dashas and the predictions are purely based on the dashas.

Western astrology primarily revolves around the sun because it places the sun in the center of the universe, thus western birth chart revolves around the sun. Contrarily, the Vedic astrology uses the moon and the twenty-seven constellations(called nakshatras). Thus, the moon and nakshatras are used to make predictions. The placements of planets in the Vedic birth chart are based on the planetary cycles in the nakshatras as seen from the earth.