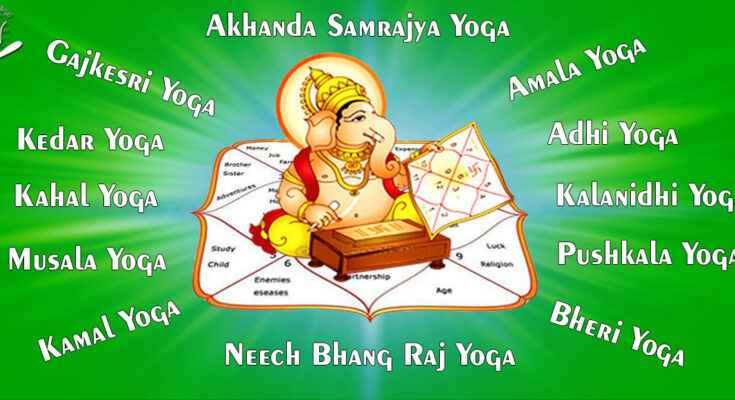 Hindu Astrology is basically predictive astrology and the predictions are mostly based on the aforementioned aspects of Vedic Astrology. In this article, we will try to analyze yogas. We will explain what yogas are, what they mean for an individual and what are the most important yogas according to Hindu Astrology

Sanskrit Yoga literally means a sum of two or more, or union. In astrology, Yoga refers to the condition created by a combination of planetary positions in the birth chart. These conditions can give you favorable results as well as unfavorable results. Astrology Yoga is different from Yoga exercise. Yoga exercise is the mental and physical exercise to create a union of mind, body, and soul, used for fitness, mental wellbeing, or enlightenment. Astrology Yoga is a planetary union or planet combinations formed in different houses in the birth chat that can create favorable or unfavorable results in human life. If the yogas is the combination of friendly planets or favorable planets, the result will be auspicious, and if the combination is between the enemies or unfavorable planets, the result will be inauspicious. Yoga is the specific relationship between the planets in a specific house.

There are 9 planets and 12 houses in the birth chart in Hindu Astrology. Yogas are formed when specific planets form a union in certain houses. There are many Yogas in Vedic Astrology, some of these yogas are auspicious and some of them are inauspicious.

Chandra-Mangala Yoga: This yoga is a result of Moon and Mars sitting on the 7th house. A person having this yoga will be shrewd, money-minded, and cruel. However, he/she will make a lot of money in his/her life.

Kaal Sarp Yoga: This yoga is a result of all planets besotted between Rahu and Ketu. Kaal Sarp yoga is neither bad not good. The main aspect of this yoga is delay in progression. A person having this yoga will have difficulty in building career, business, being successful. Despite difficulty, the person will surely build a career and become successful.

Shukra Yoga: Shukra Yoga is formed when Venus sits in the 12th house. A person having this yoga will be very rich.

Shrapit Dosh: This Yoga is called dosh (fault) because it creates negative results. When Saturn and Rahu sits together in any house, this yoga will be formed. This yoga creates a lot of difficulties in life such as problems in pursuing education, miscarriages, financial crisis, etc.

The Most Important Yogas in Hindu Astrology

Dhana Yogas: Dhana (literally wealth), yoga gives a person all the richness that one wishes in life. However, how much wealth one can accumulate in life depends on the type of dhana yogas, or the types of combinations. The most powerful dhana yoga is created when the Venus forms a union with Saturn. Another combination for dhana yoga is created when Sun is in 5th house and Saturn, Moon, Jupiter in 11th house.

3 Comments on “Various Yogas and the Most Important Yogas in the Horoscope, in Hindu Astrology”